Robin Hayes, President & CEO of JetBlue Airways and keynote speaker at the Caribbean Tourism Organization’s (CTO) State of the Industry Conference (SOTIC), held last week in Curacao, stunned his audience with a message to which few had paid much attention before. Hayes stated: “At JetBlue, we are very much thinking about the relative tax burden on our customers as we allocate capacity.”
For countries that rely heavily on the air transportation of visitors for up to 70% of their GDP, few tourism planners in the Caribbean have ever considered examining their relative position within the region concerning taxes on airline tickets. Hayes pointed out that in the region “between U.S. and foreign (Caribbean) taxes and fees, travellers can easily be hit with an extra US$150 on top of their airfare.”
According to figures provided by the trade association Airlines For America (A4A), of which JetBlue is a member, the average federal tax on a $300 airline ticket in the United States is $63, meaning that the airline receives only $237 from the ticket price. A cursory examination of Caribbean ticket taxes shows that they range from a low of $55 per ticket in the U.S. affiliated territories, up to $155 per ticket for others. In contrast, a $300 airfare to the Caribbean, depending on the destination, would result in airline yields from a high of $245 to a low of $145 per ticket. If a passenger has a budget of $300 per ticket, according to Hayes’ reasoning and other factors being equal, the airline would be more inclined to serve those destinations that deliver far better yields for a given airfare.
It is an open secret in the region that airlines often request revenue guarantees from destinations before they commit to flights. Many of these guarantees come from the promotional budgets of the Tourist Boards which substantially reduce the capacity of those Boards to promote the destination in source markets. Hayes’ revelations are prompting some countries to re-examine their air transportation policies as it would appear to be counterproductive to add taxes to airline tickets making the destination less competitive then paying those taxes out again in revenue guarantees to attract airlines. The matter is compounded in the region by a broad range of landing, ground handling and fuel costs that vary widely from country to country. Some conclude that it would be more productive to lower ticket prices and airline handling charges to make their destination more attractive and retain promotional funds to promote those more attractive airfares.
Emil Lee, President of the Caribbean Hotel and Tourism Association (CHTA), was in attendance at the regional conference and pointed to the efforts of Airlines For America in working with some jurisdictions in the United States to hold the line on airline taxes after the association pointed out to the U.S. Congress that airline taxes on tickets had increased thirtyfold since 1972, and that further tax increases were threatening the 10 million jobs supported by commercial aviation. A4A was most recently successful in forcing the unbundling of airfares for customers to reveal how much of the airfare was received by the airline and how much was consumed by ticket taxes.
Lee noted: “While there is no Federal Government of the Caribbean, CHTA will do its part to inform Caribbean governments of their relative position concerning their taxes on tickets by publishing the chart below which shows the range of these taxes for a sample set of Caribbean destinations. We now know why there is no correlation between ticket prices and distances flown to and within the Caribbean,” Lee added. 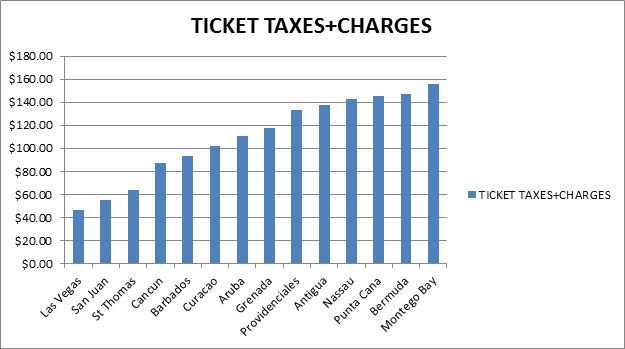 In fact, one outcome of SOTIC was a commitment from Lee to establish a close working relationship with the Global Governmental Affairs Division of Airlines For America, the airlines and other stakeholders, in addressing the matter of making Caribbean countries more competitive with airfares.
Lee also expressed, “All Caribbean governments should know that CHTA is not a proponent of reducing government income. In fact, we are proponents of increasing government income by finding ways to increase the total number of visitors and increasing total visitor spending that increases total taxes and employment.” He continued, “There is now strong evidence that reducing taxes on airline tickets increases the inclination of airlines to serve the destination, increases demand for the destination, increases funds available for promotion, increases taxes collected and most importantly leads to increases in employment. That should be very good news for the Caribbean, the world’s most travel and tourism dependent region.
Lee concluded, “Given that Airlines For America has had such success in making their case in the U.S., we will work with them, JetBlue and other carriers, and public and private stakeholders to make the same case for our region.”
Caribbean Hotel & Tourism Association
The Caribbean Hotel & Tourism Association (CHTA) is a federation of 32 National Hotel Associations with more than 600 member hotels and over 300 allied members. CHTA is the largest representative of the private sector in the Caribbean hotel and tourism industry. We are the voice of the Caribbean hospitality industry for the development of the region in the highly competitive and sophisticated environment of international tourism. Today, tourism is widely recognized as a pivotal industry in the economy of the region – and CHTA functions as the common denominator for this industry in a region of diverse nationalities, languages and styles, identifying mutual problems and marshaling the resources of the active and allied members to devise solutions.
CHTA, including the events staged by the association, is supported by Strategic Partners Cable & Wireless, HVS, Interval International, MasterCard, OBM International, Tambourine and TravelZoo.
For more information, visit http://www.caribbeanhotelandtourism.com. Follow CHTA on Facebook Facebook.com/CaribbeanHotelandTourismAssociation and Twitter Twitter.com/CHTAFeeds.