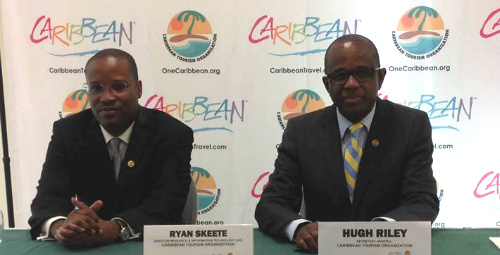 I’m pleased to announce that for the first time ever, the pace of growth of Caribbean tourism outperformed every major tourism region in the world. Our region has set new arrival and spend records in 2015, far surpassing expectations.

Caribbean tourism grew by an estimated seven per cent to 28.7 million visits, much higher than the projected four to five per cent. This performance was above the global rate of growth, which the UN agency, the World Tourism Organization quotes at 4.4 per cent.

In that period, visitors spent over a billion dollars more than they did in 2014, contributing approximately US$30 billion to Caribbean economies. That’s 4.2% higher than the US$28.8 billion spent during the previous year.

So 2015 was the second year in a row that the region has done better than the rest of the world, and the sixth consecutive year of growth for the Caribbean.

This solid performance by the Caribbean was based on several factors, not least of which was the sustained demand from major source markets.

The region benefitted from a rise in consumer confidence in the United States where a strong dollar encouraged outbound travel among Americans. Other factors include increased air capacity and persistent marketing by many Caribbean destinations and resorts plying for business in the United States.

Consequently, travel from the US grew an impressive 6.3 per cent to 14.3 million visits, accounting for approximately 50 per cent of all arrivals.
The Canadian market continued to be resilient with a 4.5 per cent increase in 2015, although its share of total arrivals dropped marginally from 12.1 per cent to 11.8 per cent, with 3.4 million Canadians coming to the Caribbean.

The European market made significant gains in 2015, recording its best performance in seven years. For the first time since 2008, total arrivals from Europe reached the five million mark, a rise of 4.2 per cent compared to 2014.

The UK was one of the dominant performers, growing by a healthy 10.4 per cent to 1.1 million visitors.

Arrivals from Germany recorded an even better 11.5 per cent rise, while France was relatively flat, increasing by 0.8 per cent.

Despite ongoing concerns about the high cost of travel within the region, intra-Caribbean travel recorded its best performance since we started keeping records.

In 2015, traffic from the Caribbean market accounted for six per cent of total arrivals, with 1.7 million visits among the various states, an increase of 11.4 per cent over the previous year. All of the regional groupings registered strong growth from this market, ranging from six percent to 9.3 per cent.

Despite the political and economic challenges faced by many South American countries, that source market continued its rapid growth in 2015, generating 2.1 million visitors to the Caribbean, an 18.3 per cent increase over 2014. This represents 7.2 per cent of overall regional traffic.

Travel to countries of the Organization of Eastern Caribbean States was up 2.1 per cent, while every other sub-grouping recorded growth of at least three per cent. The best performing was the grouping of “Other Caribbean” comprising Cancun, Cozumel, Cuba, The Dominican Republic, Haiti and Suriname, which recorded arrivals of 11.3 per cent.

An analysis of data provided by Smith Travel Research, a U.S. company which tracks overall performance of the hotel sector, reveals that Caribbean hotels performed better last year than in 2014.

As I indicated earlier, among the factors that led to a rise in arrivals was increased air capacity. The International Air Transport Association (IATA) reported a global rise of 5.9 per cent, including an increase of 9.3 per cent in Latin America.

There were frequent announcements throughout the year of new routes or additional flights on existing routes which connected major hubs to Caribbean destinations.

Unlike stay-over visits, the cruise sector’s performance was not as robust, although there was a rise compared to 2014. Demand for Caribbean cruises was relatively high in the first four months of the year, averaging a 4.8 per cent rise. There were strong gains also of 3.5 per cent in June and 3.8 per cent in November.

However, this stout performance was undermined by declines in the summer months associated with the traditional redeployment of vessels away from the region. Consequently, there were an estimated 24.4 million cruise visits in 2015, an increase of 1.3 per cent over 2014.

Needless to say, we are very pleased with the Caribbean’s performance of stayover arrivals in 2015. In each Quarter the region recorded at least six per cent growth over the corresponding quarter for 2014; and each month in 2015 was better than the same month the previous year.

Still, the Caribbean cannot be complacent. We must continue to grow our traditional markets, strengthen emerging ones and penetrate new sources as we target the 30 million arrivals mark we set some years ago. Our efforts to improve our product quality, enhance our marketing, grow our rate base, increase our profitability, and constantly offer excellent value for money, must continue.

While the outlook for 2016 is positive, we must continue to monitor some possible hurdles like the volatility of the economy of some of our main markets, China’s economic slowdown and the continuation of recessions in Brazil and other South American countries. We have seen in recent weeks the dramatic falls in stock markets around the world and other extraneous factors which invariably impact travel.

However, falling oil prices and the strength of the US dollar will have positive impacts on some key source markets. All factors considered, the CTO is forecasting a 4.5 per cent to 5.5 per cent increase in tourist arrivals in 2016.

Cruise passenger arrivals are predicted to grow by one to two per cent, as the summer re-deployment of ships continues.

I am going to discuss the Caribbean tourism performance in 2015 in greater detail than my colleague and what to expect in 2016.

Market Trends
A further look into the performance of our major source markets reveals that demand for Caribbean vacations rose in all of them. There were over 14.3 million U.S. visits to the region, 6.3% more than the previous year. Notably, the American market accounts for approximately 50% of total arrivals. The majority of Americans to the region visited the Dominican Republic, Jamaica, Puerto Rico and The Bahamas. The highest growth rates in arrivals from the US market were recorded in Barbados (27.6%), Curaçao (15.3%) and Trinidad & Tobago (14.9%).

Similarly, the Canadian market continued to perform well, rising by 4.5% in 2015, although a cause for concern is that the number of destinations (13) recording decreases exceeded the number with increases (11) in arrivals from the market. The top performing destinations were Curaçao (45.5%), Suriname (58.0%) and Barbados (17.8%).

The improvement in arrivals to the Caribbean is also reflected in improved hotel performance. According to data provided by Smith Travel Research, a U.S. company that tracks supply and demand data for the hotel industry and provide valuable market share analysis for international, regional hotel chains and independent hotels, all key accommodation metrics are up. ADR rose by 4.6% (US$ 229.44), room occupancy rose by 1.0 percentage points to register 68.8% and revenue per available room rose 6%. Moreover, the number of available rooms increased by 1.6% as more hotels were opened across the region during the year, with Aruba realizing the largest positive relative change in available rooms.

With regards to the cruise sector, cruise arrivals to the Caribbean grew by about 1.3% to reach 24.4 million, in line with expectations at the beginning of 2014. Demand for Caribbean cruises was relatively high in the winter months of 2015 and averaged a 4.8% rise in the period. However, cruise passenger visits contracted by 2.0% in the summer period, as cruise lines repositioned their ships to other destinations. Trinidad & Tobago (104.0%), Bonaire (74.2%) and British Virgin Islands (43.1%) recorded the highest percentage increases during 2015. The Eastern Caribbean, the largest sub region for cruise passenger arrivals, hosted 32.2% of all arrivals to the region and recorded the highest rate of growth of 3.3%.

Consistent with increases in stay-over and cruise visits and improved hotel room revenue, total tourism expenditure is estimated to increase by approximately 4.2% to reach US$30 billion. Hence, we estimated that a Caribbean trip in 2015, excluding airfare, cost on average about US$950 down from US$975 in 2014.

Lower oil prices, a strong US dollar, improved economic growth in our major source markets and extra airline seat capacity to the region are all expected to positively impact tourism performance in the Caribbean, while uncertainty about the impact of the mosquito-borne disease Zika persists, the implications of the economic slowdown of China, the world’s largest economy, and the continuation of recessions in Brazil and Venezuela will temper our optimism. Consequently, we predict that stay-over arrivals to the Caribbean will increase between 4.5 and 5.5%, while cruise arrivals will increase between 1 and 2%.