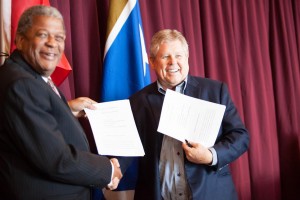 Beaches Antigua, which will be built on the site of the company’s existing Grand Pineapple Resort, will boast 1-4 bedroom rooms and suites, up to 12 restaurants, conferencing facilities and a wide range of exhilarating and unique features that include a waterpark, cinema, Xbox Play Lounge and BMX track. The resort will triple the existing Grand Pineapple workforce to 700 in addition to hundreds of construction jobs.

Sandals Resorts Chairman, Gordon “Butch” Stewart commented, “As a country, Antigua is very dear to our hearts because it was the first place we went when we ventured outside of Jamaica in 1991. This particular deal has been a long time coming – we’ve been discussing it for over three years – but it is well worth the wait. Antigua is a stunning country and we’ve enjoyed no end of pleasure operating here. It’s often said that there’s 365 beaches in Antigua, now there’s another!

Stewart went on to pay tribute to the country’s leaders also “The Government of Antigua much like their counterparts in Grenada and Barbados who have also implemented pro-business policies such as this should be applauded for demonstrating such vision and boldness. For our part, you’ll find a Caribbean company over-delivering. In Grenada, we pledged to increase the hotel’s inventory by 80-105 rooms, we built 125 of the best suites you’ll ever see in your life. We said we’d employ 100-325 construction workers, we recruited almost 1,500. We said we’d create 335 hotel jobs, we’ve recruited 560. We promised to spend US$100m in the next ten years. Thanks to the support of the Government, we’ve spent $80m in the first year alone. We would hope that each of the three new countries we are expanding into will feel the economic benefits of us being there.”

The newly-announced property will become the fifth Beaches Resort in the Jamaican-based company’s portfolio along with Beaches Barbados, which is set to break ground in the middle of next year and is yet another exciting announcement in a year of relentless investment. 2013 has witnessed the opening of the US120m Key West Village at Beaches Turks and Caicos, an announcement that the company is set to open two resorts in Barbados and the hugely anticipated launch of Sandals LaSource Grenada on 21st December of this year.

Further details regarding expected launch date and other confirmed information will be released in the coming weeks.