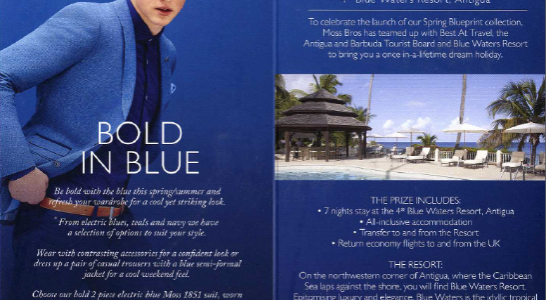 The Antigua& Barbuda Tourism Authority’s UK Office has partnered with Moss Bros, one of the UK’s most iconic brands for menswear to celebrate the launch of The Moss Bros’ Spring Blueprint collection “Bold in Blue”.

The month-long February campaign is currently being run online and across 130 Moss Bros stores.

Minister of Tourism, John Maginley said “this promotion is important for boosting Antigua and Barbuda’s brand visibility and increasing our reach across the numerous UK counties. We want to be able to speak to a wide audience, capture their data and continually communicate with them, telling them about Antigua and Barbuda; what the destination has to offer and why they should be here.”

In keeping with the theme of the spring collection “Bold in Blue”, the campaign affords Moss Bros customers the chance to win a dream holiday to the Blue Waters Resort in Antigua with UK tour operator Best@Travel.

Paul Lumley, Brand and Promotions Manager at Moss Bros noted that “Moss Bros are very excited to have partnered with the Antigua and Barbuda Tourism Authority and Best at Travel to offer customers the chance to win a dream holiday to Antigua. We have launched the competition in conjunction with our current Bold in Blue Spring/Summer collection and are very much looking forward to future exciting opportunities this partnership has to offer.”

In addition to Antigua and Barbuda branded print material displayed at every Moss Bros till, dedicated destination newsletters will be delivered directly to the email inboxes over 120,000 Moss Bros customers. The Antigua and Barbuda holiday will also be promoted on Moss Bros’ websites and social media channels with various editorial write-ups.

Cherrie Osborne, Director of Tourism for the UK and Europe says, “This partnership fits perfectly with the image of Antigua and Barbuda and the quality of the destination.  Additionally, as Moss Bros is also a top store for men’s wedding and formal wear, the promotion running during the prime wedding planning season, places us exactly where we need to be, to gain access to bridegrooms searching for wedding suits and honeymoon destinations.”

The promotion which can be viewed online at www.mossbros.co.uk/springblueprint  and www.visitantiguabarbuda.com runs until February 28th.